Spruce@Katong is Spruce’s very first franchise outlet. They have always been situated somewhere in the West; this franchise seeks to bring the modern American food concept to the East of Singapore. Football fans will be thrilled to hear that the 125-seated restaurant is fitted with a 200-inch LED TV that streams live sports including Barclays Premier League. #YaGunnersYa. Now you know where our allegiance lies.

The portion of SPRUCE Signature Salad ($19++) was so huge it was probably adequate to be one’s main course. It’s good value for this fresh mix of avocado, goat’s cheese, dates, corn, corn bread, tomato, almonds, and champagne dressing. Eggs and Turkey Bacon can be added at $2++ each.

For the less health-conscious, we recommend its Signature Spicy Chicken Balado Pizza ($17++), which is not only cheaper, but likely to be more filling. The thin crust, topped with mozzarella cheese, sliced chicken, red and green chilli, and sweet and spicy balado sauce, was much to our liking. It’s thick enough not to resemble biscuit, yet thin enough not to hinder the enjoyment of the toppings.

What we can conclude from past experiences is that Singaporeans are obsessed with putting their spice-tolerance to a test. Spruce caters to the entire range of eaters – Black Sweet Wings ($17++) and Sassy Wings ($17++) for those who do not list “spicy” in their dictionary, with the former being dominantly sweet, and the latter being only slightly (we daresay negligibly) spicy but less sweet. The SPRUCE Hot Wings ($17++) is where it starts to get hot in here – it’s medium-level bearable kind of spicy; still possibly enjoyable. Once you cross that threshold to the DEVIL’s Wings ($18++), you may wish to have a glass of milk within reach – don’t say you have not been warned. The wings themselves were meaty and juicy, with the skin thin and crisp. 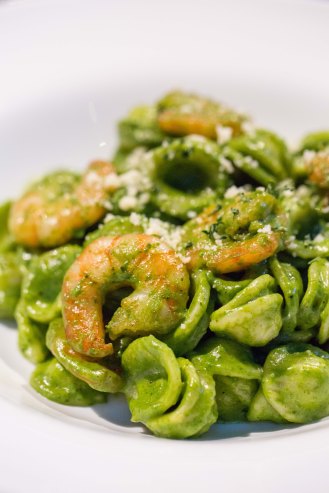 The pasta dishes were a let-down, especially since we had a degree of expectation from the description on the menu. The orecchiette pasta, which serves as the base for the SPRUCE Prawn Pasta ($22++), was especially tough and dry, even for the Italian standard of al dente. We also thought that the zucchini and garlic cream sauce was mild.

The “Katong” Chicken Laksa Spaghetti ($22++) was slightly more acceptable. It was also on the dry side, although less so than the Prawn Pasta. Likewise, we thought the flavour could have been stronger; spicier, more generous with the coconut, and the portion of chicken more liberal. This dish is exclusive to Spruce@Katong.

Ground twice before being pressed, the beef patty of The SPRUCE Burger ($20++) was disappointing. While the patty had chunky consistency, which we prefer to finely minced meat, it was insufficiently seasoned, incidentally revealing the lack of inherent flavour of the beef. Its meaty counterpart, Chimichurri Lamb Chops ($24++) performed better. The Lamb Chops were succulent, albeit suffering the same fate as the beef patty as being under-seasoned. The mint chimichurri sauce might have been the redeeming characteristic. Do note, however, that the mint overpowers any garlic or parsley flavour chimichurri is supposed to possess.

We stayed at @capitolkempinski over the weekend. We will share a bit about our experience tomorrow. For today, it’s just about the breakfast.
Douraku is a Japanese concept by TungLok, housed within TungLok Seafood all the way in the far West, at Arena Country Club (opposite SAFTI MI).
@apiary.sg is strategically located along Neil Road - within close radius, they are just about the only viable ice cream parlour. We patronised it repeatedly in part because of that.
Some of the dishes we had at @odetterestaurant earlier this year ($248++ for 6-course lunch). We are still thinking about this Basque Country Red Mullet, accompanied with zucchini flower and ika. The highlight for us was surely the bouillabaisse. Bouillabaisse is something we will almost always order if we see it on a menu. This rendition was so satisfying.
We booked ourselves seats at @kojisushibars for their omakase. They have two outlets; one at Pickering Street, the other at Raffles City Shopping Centre. The menus and prices are different. We went to the Pickering outlet.
The usual, SmokeShack ($10.90), cheeseburger with applewood-smoked bacon, was what we had at @shakeshacksg.